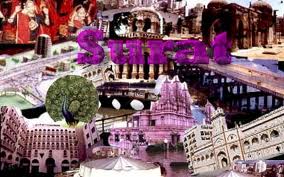 Surat is where the Britishers first landed in India. The Portuguese and the Dutch also established their business centers in Surat. The unemployment rate of Surat is also found to be zero because of the fact that there are a large number of industries located in and around the cit.

As for history of Surat, the city has its mention in Mahabharata, when Lord Krishna on his way to Dwarka from Mathura stopped at Surat. Parsis started settling in Surat in the 8th century. Read More

The tourist attractions of Surat have always been drawing the attention of travelers. The months from October to March are considered to be the best months to visit Surat. Read More

As for the geography of Surat, it is basically a port city that is located on the edge of the Tapi River. It was the damming of Tapi that brought about a total close of the porting facilities in Surat. Read More

Surat cuisine is very famous all over the world. It includes some perennial favorites like Ghari which is special sweet, Petis, Locho, Rasaawala Khaman and Undhiyu. Read More Restaurants in Surat

Facts and Figures about Surat

How to Reach Surat

Reaching Surat is not a difficult thing to do as the city is found to be very well-connected to some of the most important cities and states of India.

By Air:
There is an airport located in Surat which has direct connectivity with cities like Mumbai and Delhi. Airline companies like Air India and SpiceJet operate flights from the city of Surat.

By Rail:
Mumbai Division which is the Western railway Zone of Indian Railways possesses the administrative control of Surat Railway Station and its erection started in the year 1860.

By Road:
The most important highways that pass through Surat are Surat-Ahmedabad Highway popularly called Varachha Main Road and Udhana-Mumbai Highway called Udhana-Navsari Highway.
Outer Ring Road and Middle Ring Road in Surat are also under construction in order to meet up with the traffic problem faced by the city due to rapid urbanization.
New expressways are also being planned in Surat in order to get rid of heavy traffic in the city. The Golden Quadrilateral Highway System is also found passing through Surat city and there is even a 16 kilometers connector highway that connects the city to National Highway 8. In this way Surat is found to be very well-connected to different cities of India by road.