Domino’s first Indian store was opened in New Delhi during 1996. It is interesting to know that who was responsible to bring this delicious pizza to India, where already similar varieties of food items are deliciously prepared and consumed by many.
The truth is that the company has 600+ Pizza restaurants network in India. The ratio of pizza vs rices in India varies rapidly. So, the people taste turns around over pizza other than rice. 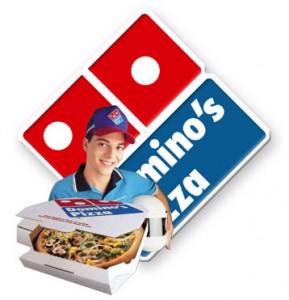 They commit that they will bring happiness, fun and conveniences to the entire consumer’s day to day life by delivering oven hot pizza at their door step. Sincerely they aim to fulfill this commitment to the ever growing guest base of Domino’s.

Domino's Pizza in India has a network of 650 Domino’s Pizza restaurants in 137 cities (as of 31st October, 2013) and is the fastest growing food service company.
As a market leader the Company has a 67% market share in India (ref report 2013 of Euro monitor). By 2014 they want to be the most active   Social Contributor to Food Industry by 2014.

Spicy Delight
It has a combination of Golden Corn, Red Paprika & Jalapeño as toppings

Veg Extravaganza – black olives, golden corn, mushrooms, crispy capsicums, jalapeno and juicy tomatoes. Extra cheese spread all around Never fail to remember that Domino’s Hot Pizza is delivered in less than 30 minutes or please take it free is the commitment given by the company.
To one’s surprise there is great deal and offers on your buys. Whether it is online or IN STORE transaction, gift vouchers and 20 to 30 % off on the buy is given to all the guests.
It is interesting to find that closing time of each offer is displayed for your information. But no need to worry as they come out with another offer for a different product and a great benefits are there for the buyers.

Explore more about Food in Surat