Surat is a land of festivity and culture. There are a number of festivals and events that are celebrated in Surat with great fanfare and pomp.
The kite flying festival of Uttarayan that is celebrated on 14th January which is an auspicious day of Makar Sankranti is the most popular festival that is held in Surat.
This festival started being celebrated in Ahmedabad in the year 1989. This is a festival when the energy of even the oldest people in Surat is found to reverberate. 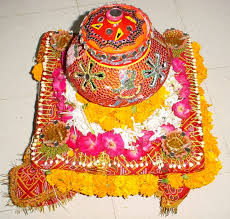 Surat’s custom is also found displayed in Dang Durbar which is a traditional event held in Surat. This is an event when the people of Surat dress themselves up in traditional attire and they perform the garba and the ras.
Skilled craftsmen from within Surat and also from different other parts of the city arrive at Surat for the display of their products. The festivals and the events that take place in Surat represent the culture and the ethnicity of Surat.
Surat is a place that is also called the western gateway of India because of its tactical position. Most popular performing art forms in Surat are Ras, Tippani Nritya, Garba, Padhar Dance, Siddi Dance and Dangi Nritya.
There are some tribal dances that are also practiced in the internal parts of Surat. Bhavai is the folk drama of Gujarat and it is very popular in Surat.

The most important festivals that are celebrated with great fanfare and pomp in Surat have been detailed below:

It can be said that all the important festivals of India are celebrated by the people of Surat. Diwali, Ganesh Chaturthi and Navratri are the main festivals in Surat that are celebrated with undying excitement and enthusiasm. 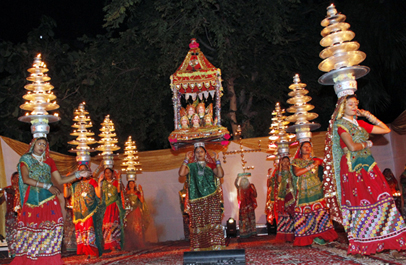 The kite-flying festival of Surat is held on Makar Sankranti that is on 14th of January. This is a festival that serves as a host to people who love art and gather in Surat from different parts of the country. 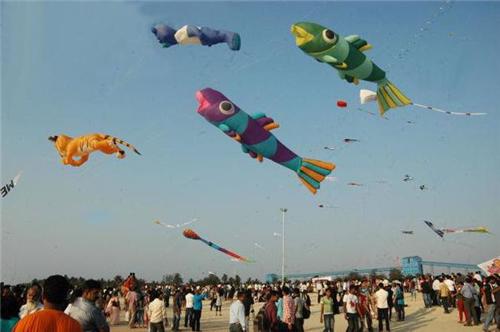 The festival starts at dawn and it continues till fag that is the day end. ‘Tukkals’ that are specially illuminated kites are strung and they decorate the entire sky. the joy, enthusiasm and spirit of the onlookers and the participants are the main things that can be found in this festival. 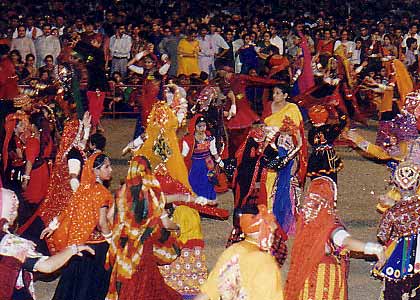 Navratri is a festival that is celebrated throughout India but the enthusiasm and the zeal of the Guajarati people during navratri is unmatched. Garba is the main reason behind the grand celebration of Navratri in Surat.
It is a long-established dance form of Gujarat that is specially performed during the celebrations of Navratri. It is during the nights of Navratri that the people of Surat dress themselves up in traditional attire and perform the garba.
Garba is nowadays performed in several other parts of India but the Grab of Gujarat remains untouched. During Navratri, the celebrations of Garba are held at several places throughout Gujarat including Surat.

This is a festival that marks Lord Krishna’s birthday. Janmashtami celebrations in Gujarat are majorly found in Dwarka and Surat.
Lord Krishna’s infant idol is worshipped throughout Gujarat including Surat and the celebrations continue till late night.

The Modhera dance Festival is a festival that is celebrated for three days and it mainly constitutes the classical dance of India. 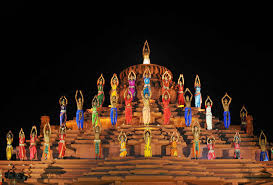 The Gujaratis believe is a very famous saying’ Surat Nu Jaman, Ane Kashi Nu Maran’ which means eating in Surat and dying in Kashi.
This saying proves the point that food is a very important part of Surat and the people of Surat love to gorge on lip-smacking foods and snacks.

Fairs in Surat are also held annually and from time to time. The people of Surat also take part in different fairs with equal enthusiasm and zealousness. The famous Fairs in Surat have been enumerated below:

Dang Durbar is an annual fair that is held in Surat during the spring months. The fair is a representation of the old tradition of the chieftains and the kings of Surat who practiced the custom of visiting their region to be a part of the famous darbar.
The durbar at present witnesses the gathering of tribal people from different parts of Surat. The Dang darbar is a fair that is held only a few days before Holi and the other name for this fair is Jamabandi fair.
Dang Darbar is a fair that also displays the crafts and the arts of tribal people who get good help through this fair as they are able to sell their products to the people who attend this fair.
There are many traders and merchants of Surat and the other districts who also gather at Dang Darbar for the exhibition and display of their products.

Textile Expo Surat also forms a major attraction in Surat and it is basically a show that encompasses the textile industry of Surat. This show serves as a major business centre for exhibitors who try to showcase their services and their products to customers.
The people also get a very good opportunity to gain latest insight into the industry and to make the choice from varied services and products.
The show also turns out to be very advantageous for the exhibitors who get the chance to procure massive exposure and visibility to the products and services that they deal in and also helps in building the brand equity of their products.

Book Fairs of different types are held from time to time in Surat. One of the most popular book fairs held in Surat during recent times was the Swami Vivekananda National Book Fair in which many book selling shops and publishers had an active role to play.

The Trineteshwer Mahadev fair is also an important fair that is held in Surat. This is a fair that has always been successful in attracting the attention of the tourists to Surat.
During this fair, women belonging to pastoral communities choose life partners and the eligibility of the men at this fair is indicated by their carrying of an embroidered umbrella.
There are some cultural aspects that have a great role to play in adding to the ambiance and the purity of this fair.

Explore more about Culture of Surat