The basic facilities, services and installations needed for the functioning of a community or society, such as transportation and communication systems, water and power lines and public institutions including schools, hospitals would be included in a city’s infrastructure. Talking about infrastructure and this in when Gujrat comes to your mind. One of the fast developing states of India, Gujrat possess some of the great cities of India, one of which is Surat. Surat and south Gujarat are the centres of industrial activity and is pivotal in the state's development. Surat being the second largest city of Gujrat is one of the fastest growing cities of India. 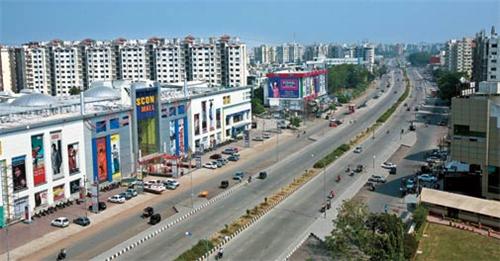 Surat being the industrial center, has huge number of  migrants resulting in increase in the urban population. Thus, certain growth management strategies are formulated to boost up the infrastructure  and to create a viable environment promoting growth. One such strategy was ‘Comprehensive Mobility Plan’ formulated in 2008 with a focus on increased connectivity, integrated transport systems, new parking projects and policies, and provision for pedestrian and cycle users. The city has also developed waste to energy projects, energy efficiency systems and environment enhancements measures to create an enviable range of sustainability initiatives. Certain infrastructural aspects in Surat are as follows

The Industrial Area in Surat

Surat is one of the most well planned cities in the country. The diamond cutting and polishing industry of the city can give an outlook of the industrial scenario of the city. About 42 percent of the cutting, polishing and finishing works of the world's diamond products are done here. The city also holds some rich textile industry and several heavy engineering plants.

Road and Rail Connectivity of Surat

Surat being an industrial centre and an upcoming city, traffic problems are prevelant. There are over 12 lakh vehicles registered with the regional transport office, as against the estimated population of 37 lakhs. SMC ( Surat Municipal Corporation ) therefore prepared the Comprehensive Mobility Plan which anticipates comprehensive development of transport infrastructure including road network on Ring and Radial model, multi-level parking and BRTS

Surat is well connected  to various cities through state highways and national highways. NH8 connects Surat with Mumbai, Delhi, Chennai,Hyderabad and Kolkata. All the major cities of Gujrat including Jamnagar , Rajkot, Bhavnagar, Valsad, Ahemdabad and Vadodra are very well connected with Surat

A Dedicated Freight Corridor (DFC) is also being developed linking Delhi, Mumbai, Kolkata, and Chennai. The proposed DFC passes through six states in India, of which ,Gujarat accounts for 38% (564 Km) of total DFC length (1483Km). Surat- Navsari industrial area lies within 50 Km of the Dedicated Freight Corridor in southern Gujarat due to which there will be  good  connectivity between ports, industrial estates, hinterlands, markets and points of agricultural produce.

Airports and Port Connectivity of Surat

Surat has a domestic airport which is well connected to different metros, thus making transportation by air much feasible. Its has daily flights to Mumbai, Ahemdabad, Jaipur and Delhi.

Surat’s geographical location is ideal for a fledgling industrial centre. Its proximity to sea makes the transportation through water  much easier. Magdalla & Hazira Ports  are the two ports in Surat which has good rail and road connectivity.

Hazira Port in Surat has close proximity to the high speed dual carriageway which is under construction. The port is also well connected with main Mumbai – Ahmedabad - Delhi broad gauge railway line. Delhi Freight Corridor is expected to be a major thrust for the industrial growth of Hazira Port. Hazira also known as the ‘gateway port’ connects the hinterlands of north, west and central India as it is situated in the midst of one of the most industrialized areas in the country. The existing industrial portfolio of Hazira includes industrial activities such as petrochemicals, fertilisers, heavy engineering, steel, energy and port related activities. More than 20 large and medium sized companies are located in Hazira, including Bharat Petroleum Corporation, Cairn Energy, Essar Power, Hindustan Petroleum and Larsen & Toubro, Reliance, NTPC among others.

It  is a lighterage port situated on the western coast of India in southern Gujarat. It is on the southern bank of river Tapi. The nearest broad gauge railway line and Surat railway station are 15 and 16 km away from the port. The port is also well connected by road with Rajasthan, Madhya Pradesh, north Maharashtra which are hinterland areas to the port. The airport is 4 Km away from the port.

Healthcare serves as one of the factors that help in the social development of a city. Surat has some very good specialised hospitals. There are 11 community and 50 primary health centers present in the district. 89 private hospitals are operational in Surat City. Lions Cancer Detection Centre Trust at Surat has been providing specialised treatment to cancer patients since 1968.  There are also three TB hospitals present in Surat to provide best treatment facilities.

Rapid industrialization of Surat, with the growth in labour intensive industries namely textile manufacturing, trade, diamond cutting and polishing industries, has led to the massive migration of labour from different parts of the country to the city, which coupled with insufficient availability of affordable housing has led to an increase in slums. To cope up with the increasing population in the city, various low cost housing are built in the city.

Surat in Gujarat is planning to set up infrastructure to the tune of Rs 1,500 crore in 2013.Few  of the projects in line include:


There are various infrastructure companies in Surat, working towards the development of the city.

Comments / Discussion Board - Infrastructure in Surat