Mahuva is a small city on the outskirts of Surat District in the State of Gujarat in India. Mahuva is recognized for its gentle weather and green, fertile environs, including a lot of coconut tree farms.
It is situated in the region, which is usually semi-dry. Mahuva is renowned for raw onions, wooden toys, groundnuts, and home Jamadar mango. The city is home to a flourishing agribusiness trade with a stress on enterprises that dry out vegetables such as onions and garlic for applying in processed foods. 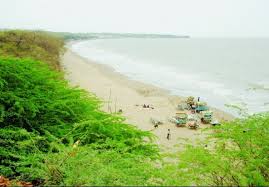 Mahuva is famous for Vighneshwer Temple or the Digamber Jain Temple. The Digamber Jain Temple is located at  Poorna River bank, near to Kshetras such as Taranga, Pavagarh, Girnar Gajpantha, etc., which are located on the Gujarat hills. The place boasts a peaceful atmosphere and occupied with natural loveliness.

In olden period,   Bhagwan Digamber Jain Chandra-Prabhu Temple and this rural community was referred to as Madhupuri. Script engraved on pillars made on wood and  temple proves that  over a period of 1000 years old.
Then the temples were rebuilt in 1625 and again in 1827. Wonderful and huge building of the temple demonstrates that a huge Jain population lived here before thousand years.
There is a legend behind the origin of the Digamber Jain Temple. The deity of Parshv Nath and Shri Vighn-Har, a cultivator founded in farm at Sultanabad village of Desh  Pashchim Khan District in Maharashtra.
Consequently, a  traveling group was arranged with deity kept. On the way of yaatra, at several area efforts were done to get the deity out from trolly, became unsuccessful. The trolly was never stopped up nor could the deity and get down from the trolly.
Eventually, the trolly ceased up in front of the Bhagwan of Digamber Jain Chandra Prabhu  temple in he pace at  Mahuva and the deity was get down of trolly easily. Then a Mahotsava of Panch Kalyanak Pratishtha was arranged, and therefore the worshipped deity was installed in the innermost room of the temple.
The deity of Bhagwan Shantinath was set in left side and the deity of Bhagwan Chandra Prabhu was set on the  side of right and of this phenomenal deity of Bhagwan Parshv Nath.

There were several miracles happened due to idol of Bhagwan Parshv Nath. After the installation of the idol of Parshv Nath, Jain and other communities experienced group of cheerfulness and setbacks of the public started vanishing.
So this deity became renowned as Parshv Nath Vighn-Har. People started coming from all place of country and abroad. They feel a sense of everlasting harmony and happiness.

Deities and their Temples in Mahuva

This big antique temple is extremely handsome and wonderful. The 47-inch miraculous deity of Bhagwan Parshv Nath in sitting stance is set up here worth seeing.
The Darshan of deity is obliged to take away the worldly qualms and followers feel everlasting tranquility and happiness. This very old and beautiful deity of Bhagwan Chandra Prabhu is as well in the temple with the idol of Bhagwan Shantinath, all are seeing.

There are numerous luxury and budget hotels in and around Mahua that offer the rooms at an affordable rent. Some of the luxury hotels boast a large infinity pool and comfortable villas with a lucid aerial view of the Surat city.
The big villas that are featured with private balconies and sundecks are adorned with fine wood furnishings and affectionate colors. Most of the world’s top best hotels are located at a distance of 2 kilometers from the Surat airport.

Surat, a diamond center, is a significant town of Gujarat. A lot of travelers, both from India and overseas, come to trip Surat each year. Intercity and interstate services are being operated by the Gujarat State Road Transport Corporation between Surat to Mahua.
In the course of its intercity bus services, GSRTC links other major cities like Rajkot, Vadodara, Ahmedabad, and Gandhinagar. By means of its fleet of over 8,000 buses, GSRTC is dedicated to offer efficient bus services to the travelers.
The city has first-rate bus services because both private and government operators compete to offer better services to the tourists.