Rander is a small town situated on the bank of the Tapti River in Surat district of Gujarat state in India. It is popularly known as the City of Mosques, and is situated at a distance of just two kilometers from the Surat city. 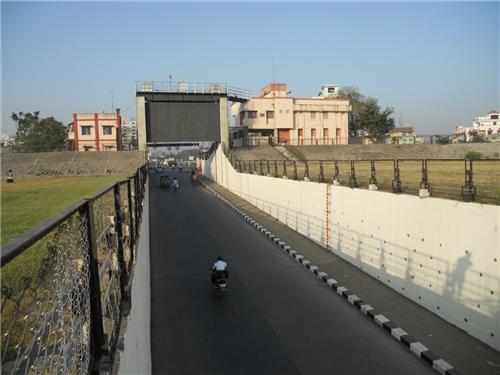 In AD 200, during the administration of Shanprat, countless Jain Temples were constructed in and around Rander. There was a little historic principle that states Rander was a significant port of Western Hind. Trade was as well carried out with Miser, Arabia, Sudan and other western nations in the course of the Rander harbor.

The first recorded reveal of Rander was in the Kitab al Hind book written by Al Biruni in 1050. During the ancient medieval period Rander had turned out to be a significant harbor in western India, though it is smaller than other harbors such as Broach in Gujarat.
Ships loaded with silk, spices, Benzoic and ceramic from as much as China and Sumatra landed in Rander. The main traders were Nawayat Arabs, who settled in Rander in the year 1225.

According to the mentions of Duarte Barbosa, the Portuguese traveler in the year 1514, Rander is the good city of the Moors, constructed with extremely pretty squares and houses.
It is a wealthy and pleasant place, and the Moors of the city deal with Bengal, Malacca, Tawasery, Martaban, Pegu, and Sumatra in all varieties of spices, medicines, musk, silks, Benzoic and ceramic.
Therefore, consistent with Barbosa, the Moors of Rander did not follow the custom of Islamic Purdah, and were well ahead of their times. However, the goodness of Navayat Arabs is obvious by the numerous darghas and mosques they constructed.
In the year 1225, Arabs sailors and merchants resided in Rander following shifting the home Jain rulers. In the year 1874, the Hope Bridge was constructed across the river connecting the Rander city to rural communities on the other bank of the river.

Places to See in and Around Rander

There are several worth seeing tourist places in and around Rander. Some of them are:

One among the ancient cities in South part of Gujarat, and the major city in the region earlier than the center moved to Surat located in Rander lies across the walkway NE of Surat.
The four-storey Friday Mosque or the Jama Masjid in Rander was constructed during the 16th century employing construction materials from Jain temple which was found at the location previously.


How to reach Jama Masjid in Rander

By Rail: Railway stations are located at the eastern side of the city

The 24 square kilometer Vansda National Park lies at the eastern part end of the Navsari district in the Southern part of Gujarat state.
You can see untamed mango groves, maybe even a wild comparative of the banana plant, and interlacing in between are massive creepers.
You start to observe not only the gigantic trees, but also the small creatures that exist between the cracks in the bay. Shortly even the mushrooms and ferns on a rotting log appear like elaborate decoration.
You are astonished by an area of the Bharadi grasslands put away east of the hub of the Vansda National Park. Also, at the Ambika River, you are charmed by the assortments of orchids, fragile and multicolored.

You have to take a profound breath and disappear because you have reached the Saputra Hill Station, the nature’s womb. During the winter season, at the fall of dawn, hike up to the Gandhi Shikhar while the river of brightness cleanses the streams over rolling mountains and the traveling birds, into a supernatural dance of arousing.

During the rainy season, respire in the undulating hills of Saputara, echoing green shades, green with flowers, and observe the contemplating rain drops resting still on inclined leaves.
A few of the thickest jungle cover in the state encloses you. In the summer season, walk relaxed in the area of the hill of the Governor, and you can observe the sun immerse into the Saputara Lake as the sky starts to sparkle with stars.

As your van gulps uphill, interweaving over the Ambika River, you put down all the overcrowding of cities and towns far beneath you and go into the spirit world of ancestral people.
Snuggled in the Sahyadri range, at a height of about 1000 meters, this Dangi farm gets its name from the Snake God respected by the ethnic people and interprets as the house of snakes, Saputara.

Purna Wildlife Sanctuary boasts the thickest wood cover in the state, and the maximum average precipitation, at 2500 millimeters. At dusk, the 160 square kilometers of fertile undulating hills, bamboo, and teak, packs with the melody and drums of the Dangi families that inhabits Vansda as well.
The major rural community of the Mahal is in the middle of the Purna Wildlife Sanctuary on the Purna River banks, with a forest guest house. Vansda and Purna together are the single secluded forest regions in South Gujarat.

Purna is a refuge, where abundant thick forests with bulky bamboo brakes charm visitors. People get astonished to observe such immaculate forests in the region, which ensues to be an annex of the Western Ghats.
For an eco-traveler who would like to benefit from birds of damp deciduous forest blended with bamboo, this is the most excellent place to visit.
The refuge is a part of the woods on the northern edge of the Dangs district in South Gujarat. The sanctuary covers an area of 160.8 square kilometers especially reserved for forest and has been declared as Sanctuary in the year 1990.

The Purna Wildlife Sanctuary supports a range of plants and flowers of extremely high evolutionary importance. The Sanctuary, together with Vansda National Park, is the single secluded region in South Gujarat for preserving different biological sources.
Approximately 700 recognized plant classes with the supremacy of grasses and wide-leaved plants in towering diversity and density are found in the Purna Wildlife Sanctuary.