Agam Mandir is located in the Gopipura village of Surat. The temple is dedicated to Lord Mahavir and also includes the idols of Shri Adeshwar Bhagwan and Shri Parshwanath Bhagwan. The walls of the temple are inscribed with the copper sheets comprising of Dharm Agams. 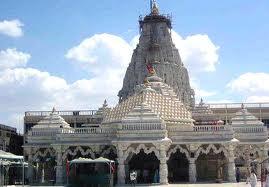 The temple is dedicated to Mother Goddess Ashtabhuja Ambika.

The said temple is built during the year 1969 on the banks of River Tapti and Navrathri celebrations for the goddess is considered to be the most auspicious occasion in this temple.

Ambaji temple is considered to be the major Shakthi peeth of India.The temple is situated at a distance of 185 kilometres from Ahmedabad. The sacred “ Shree Visa Yantra” is worshipped as the main deity of the temple instead of idol worship.

The temple authorities have restricted the view of Yantra with common eyes due to its sacred worship. Celebrations at the temple are at peak during full moon days. A number of devotees will come by walk to visit the temple and shows their devotion to Maa Ambe.

One of the religious places for the Muslims in Surat is Khwaja Didar Dargah. Here the pilgrims gives their respect to the grave of a Hindu King named as Tan Singh. the King converts himself into Islam and serves the Saint who converted him.

One of the Jain temples located at Surat is Chantamani Jain temple which comprises of the rare paintings and carvings of Jain monk Acharya hemachandra and Kumarpal.

The temple was constructed during 15th century and pilgrims belonging to Jain community frequently visit the temple to get blessings from the Monk. 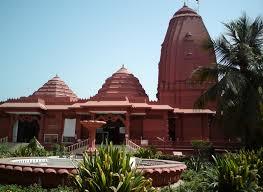 The temple is solely dedicated to Lord Krishna. ISKCON is part of Gaudiya Vaishnava Sampradaya and  the principle of unbroken disciplic succession is the main Hall mark of ISKCON temple.

Parsin Agiari is a sacred temple for Parsis as the sacred flame keeps burning and hence non-Parsis are not allowed to enter the temples.

Jama Masjid otherwise known as Friday Mosque constructed during 16th century is one of the oldest masjids located at Surat.
Jama Masjid due to its ancient history is frequently visited by pilgrims and often crowded.

This temple is located at a distance of 130 kilometres from Ahmedabad. Bhimnath Mahadev Temple is a five thousand years old temple and the temple relates to Pandavas of Mahabhrath era.

One of the sacred Hindu temples at Surat is Shri Kal BhairavNath Mahadev Temple which is dedicated to Lord Bhairavnath. The temple is located at Kamrej area of Surat.