Keeping with the aim of making Surat a world class city in the next three year the municipal corporation of Surat (SMC) has proposed Metro rail project in Surat. SMC (Surat Municipal Corporation) and SUDA (Surat Urban Development Authority) work jointly to complete the metro construction project before 2018.
Surat metro is constructed on the route where BRTC buses are not available. The route that being looked at are Suart-Navsari, Sayan-Sachin, Suart-Kamrej and along the route of the bank Tapi river to Ambika Niketan. 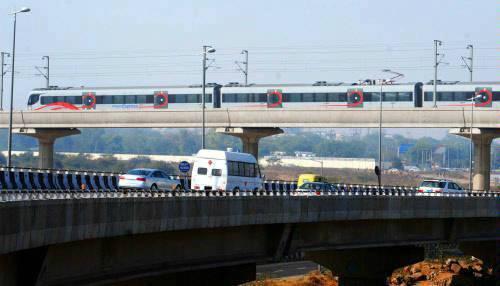 Surat metro proposal is submitted by Bhimji Patel, the chairman of the standing committee of the Surat Municipal Corporation in August, 2012. He proposed four segments of metro routes from Surat city.
These four segments are Sachin to Sayan parallel to the railway line, 40 km of Dumas to NH8 via canal, Kamraj to Dumas along the bank of river tapi and on outer ring road in Surat.
The Bhemji Patel intercity metro plan was approved by the Chief Minister of Gujarat Mr. Narendra Modi in August, 2012. According to SMC the Surat metro rail or monorail project come in reality in the city by 2018.
Following is a list of stations on this route for East-West Corridor

Explore more about Transport in Surat