Suratis ranked 2nd and 8th in terms of area and population respectively in India. Located on the bank of River Tapti, Surat is one of the main cities of Gujarat.
This city is known for its industrial excellence and growth with its roots strongly laid in diamond polishing and textile industries. It has so many textile industries that it is called the textile capital of the country. 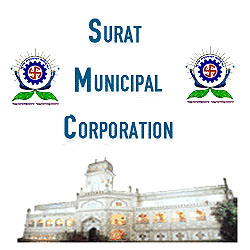 The boundaries of the city are expanding day by day and it is soon heading to be the largest city of the country. With the pace it is expanding, it is not going to take so long to achieve this.
The municipality of Surat is a self-government body and it has come to action under the act of Bombay Provisional Municipal Act framed in 1949.

The Surat Municipal Corporation’s goal is to achieve heights in development in every aspect of its citizens’ lives and it is working hard to achieve this goal and is getting succeeded in it.
The Surat Municipal Corporation is not going to stop its developmental measures until the city is excellently equipped with all the necessary facilities and all its citizens’ get better standards of living than the present standards.

These are the goals set by the Surat Municipal Corporation and the body is heading straight to the completion of these goals since many of them are being already achieved.

The following authorities are distributed according to the provision of the BPMC Act 1949 and Section:

Standing Committee: This committee constitutes of Municipal Secretary and auditor. All divisional heads report to the municipal commissioner.

Here are the centers of Surat Municipal Corporation spread in various areas of the city:

Explore more about Administration in Surat