Surat is a city in Gujarat located on the left bank of the Tapi River. It is a port city of the state and one of the most vital cities of Gujarat. It is a hub for commercialization and industrialization. The locals of the city possess a high standard of living.
The history of Surat goes back to 3000 BC. Surat was ruled by several rulers and dynasties like Shah, Mughals, Tughlaq and Ghori. These rulers magnified the glory and beauty of the city. They built a number of castles in and around the city for security.
The city is most famous for its flourishing business, cream of businessmen and its trade. Traditionally, Surat was known as Suryapur by the Brahmins. During the sixteenth century, however, the city was invaded by foreign traders, especially from Europe.
Surat also ultimately gained independence during the freedom struggle by the progressive participation in India’s freedom movement. As per the mythological beliefs, Lord Krishna halted in Surat for some time during his journey from Mathura to Dwarka.

Surat abounds in sightseeing and is famous all over the world for its heritage and culture. Some of the most sought after places to visit here read more 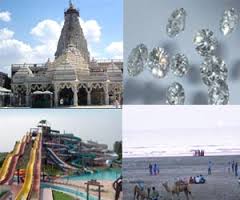 People of Surat
Surat is known for its friendly and cordial inhabitants. People in this city are polite affectionate. The city is a magnificent commercial hub which accommodates a huge number of industrial sectors.
Surat inhabits a fair ratio of males and females owing to its dense population. People belonging to different religions and faiths reside in this city harmoniously.
Surat has many Gujaratis as well as people speaking other languages. All the major festivals are enthusiastically celebrated by all the natives of the city together.
The urban areas of the city comprise of businessmen and aristocrats, whereas, rural areas constitute farmers and smaller sections of the city.

Surat poses a well-refined blend of different sects of people with varied dialects that have originated over the years. The zesty traditions of the place exhibit the lively customs and principles followed by the ancestors. The language of place is what sets it apart from the other.
The language spoken in Surat enables the people to converse with each other for business and other purposes. The other languages spoken here are English and Hindi which are also used commonly by the people


Eating Out in Surat

Surat offers a variety of unique and relishing dishes which come under the famous Surti cuisine, some of which are, Ghari (a type of sweet), Locho, Undhiyu, Rasaawala Khaman and Cold Coco. The traditional Surti is full of spices, in comparison to the other cities of Gujarat. Read More

Navratri means nine nights. During these nights we worship nine goddesses. This is a festival of Hindus which involves worship and enjoyment that is dance. The tenth day of the Navratras is Dussehra which marks the end of evil and victory of good. The dates vary according to the position of the moon. Read More

Folk dance and Music blend with the unique culture of Surat and make the city more captivating for tourists.
The popular folk dances of Surat are:

Garba is one of the most elegant and graceful dance forms of Surat. It is performed primarily by females in big circles. This dance is performed by singing and clapping to a rhythm while going around the goddess.
They are attired in cholis, ghagras and Bandhani dupattas. These days even men perform this dance wearing vibrant traditional kurtas called Kehediyu, chudidar and turbans.

Dandiya –This is a lively, energetic and joyful dance performed mainly on the nights of the Navratri. Men and women dance in two circles, one moving clockwise and the other moving anti-clockwise. They carry decorated bamboo sticks in both their hands called dandiyas.

Summers are warm in Surat and hot winds blow throughout the day. Monsoons are moist and humid which should be avoided for a visit to the place. However, the best time to visit Surat is winter that is between October and February to celebrate Navratri.


How to Reach Surat

The Surat Airport is located around 12 kilometers away from the main city. It provides flights from the major cities in India. It is the fastest mode of transport from any city.

As far as, Railways in concerned, the Surat Railway Station is constructed in proximity to the city. Most of the important trains station here on a regular basis to commute from cities of Gujarat. It is also comfortable means for transportation to and from Surat.